THALAIVII is the story of a girl’s journey from being a prominent heroine to a prominent political figure. The story begins in 1965. Jayalalithaa aka Jaya (Kangana Ranaut) is an upcoming actress in Tamil cinema. She has been coaxed into joining the profession by her mother (Bhagyashree) so that they can have a steady means of income. In no time, Jaya gets a chance to star opposite MJR (Arvind Swamy), one of the biggest superstars of Tamil cinema. MJR loves Jaya’s attitude and her fearless persona. She, meanwhile, falls for his good-hearted nature. Both end up working in many films together. They emerge as one of the most popular jodis, much to the annoyance of R M Veerappan (Raj Arjun), MJR’s PA. Veerappan believes that MJR’s fondness for Jaya can spell doom for the superstar. A few years later, MJR enters politics and joins DMK, headed by Karunanidhi (Nassar). Karunanidhi wins the state elections by a record margin and one of the reasons is that MJR campaigned for him. MJR sadly is not able to attend party meetings. Also, he is more popular and that doesn’t go down well with Karunanidhi. Both have a showdown after which MJR quits DMK. He decides to float his own political party. Veerappan advises MJR that he should stay away from Jaya before it causes problems for him in his political career. MJR agrees. Jaya is devastated. The story then moves 10 years ahead. MJR has become the Chief Minister for the second time. Jaya is not getting many films due to her age. She starts accepting dance shows. One such show offered to her is a government sponsored one in Madurai. At this event, she meets MJR once again. This time, MJR invites her to join his party. Jaya declines but while going back to Chennai, an incident leaves a deep influence on her. In no time, she enters politics. What happens next forms the rest of the film.

THALAIVII is based on the book ‘Thalaivi’ by Ajayan Bala. Vijayendra Prasad’s story is excellent and does total justice to J Jayalalithaa’s journey from being a film star to being a Chief Minister. It is not possible to show all major episodes and hence the writer has handpicked and chosen the best aspects of her life. Thankfully, it pays off. Vijayendra Prasad and Rajat Arora’s screenplay is captivating. There are a lot of dramatic moments in the film and the writers have penned them very well to bring out the desired impact. However, the first half is not as powerful. Also, the focus at this hour is mostly on Jaya’s film journey. Rajat Arora’s dialogues are sharp. The dialogue writer is known for some smart, whistle-worthy lines and he lives up to the expectations.

A L Vijay’s direction is very simplistic and massy. The film is executed in such a way that it is easy to understand for all sections of the audiences. He defines the characters very well from the very beginning and has peppered the film with some well executed dramatic sequences. In the second half, he takes the film to another level. Special mention here should be made of the funeral sequence of MGR. It’s sure to give one goose bumps. On the flipside, he is not in top form in the first half. The scenes are recklessly edited as if to hurriedly reduce the runtime. A few sequences will leave audiences bewildered. For instance, the scene where MJR is shot by a disgruntled film producer is quickly wrapped up and viewers will have difficulty in understanding what exactly happened. This flaw is seen in the second half as well. Why didn’t Jaya inform MJR that her meeting with Indira Gandhi has been successful? Was it a way to extract revenge or something else is again something that can confuse audiences. Lastly, the Hindi version has a major challenge since the film is about a politician down South. Most viewers in North, Western and Eastern India are aware of her but may not be interested to see her biopic.

THALAIVII begins with a dramatic scene in the Assembly and sets the mood. One expects fireworks from here on. But the film then focuses on Jaya’s film career. Even here, the makers try their best to keep viewers engaged. The Medu Wada sequence works very well. However, one gets restless as one waits for her political journey to begin. That finally happens in the second half and then there’s no looking back. From Jaya exposing the corruption in the mid-day meal programme to Jaya wooing Prime Minister Indira Gandhi to her campaigning to the climax, A L Vijay keeps the film on a constant high. The funeral sequence of course is out of the world and even the pre-climax and climax contributes to the mass quotient. The film ends on a rocking note. 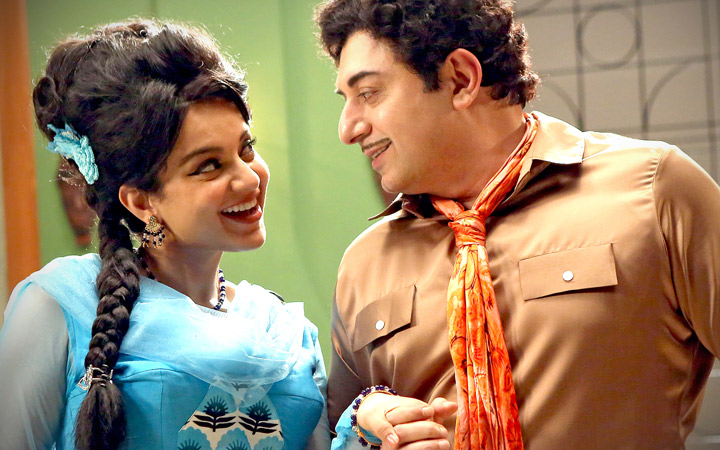 Kangana Ranaut lives the role and is fantastic to say the least. As the heroine of the bygone era, she is completely convincing and even as a fiery political leader, she rocks the show. In short, this is yet another award worthy performance from the National Award winning actor. Arvind Swamy is a big surprise. He had a very challenging role but he pulls it off effortlessly. Both Kangana and Arvind compliment each other well and their chemistry is electrifying. It’s also praiseworthy how the makers have treated the bond of Jaya and MJR. Raj Arjun is the third most important actor and has a considerable screen role. For most parts of the film, he’s constantly angry with Jaya. However, he plays his part well. His eyes do a lot of talking. Nassar, as expected, is quite nice. Bhagyashree is subtle and apt for the part. Madhoo (Janaki; MJR’s wife) doesn’t get much scope. Thambi Ramaiah (Madhavan) is fair. Flora Jacob (Indira Gandhi) is alright but Rajiv Kumar (Rajiv Gandhi) looks ditto like the ex-Prime Minister of India.

G V Prakash Kumar’s music is poor. The film would have benefited if it had one chartburster. ‘Chali Chali’ is average while ‘Nain Bandhe Naino Se’ is well shot and choreographed. ‘Teri Aankhon Mein’ doesn’t leave a mark while ‘Hai Kamaal’ works more due to the visuals. The title track is the best of the lot. The background score is cinematic and dramatic.

Vishal Vittal’s cinematography is spectacular. The indoor and campaigning scenes especially are exceptionally shot. Neeta Lulla’s costumes are glamorous and reminiscent of the clothes worn at that time by the stars and political leaders. S Ramakrishna and Monika Nigotre’s production design is very detailed. The bygone era is perfectly recreated and they have also ensured that the film looks like a grand affair. Pattanam Rasheed’s makeup is spot-on. Unifi Media’s VFX is decent. Ballu Saluja’s editing is first-rate in the second half but in the pre-interval, it’s quite haphazard.

On the whole, THALAIVII is a well-made and well-written political saga that is embellished with yet another award-winning performance by Kangana Ranaut. However, the poor buzz and prolonged closure of theatres in Maharashtra will affect the box office prospects of the Hindi version to a great extent.

40% quota in govt jobs to free travel: What’s in store for UP women in party manifestos | India News – Times of India

India’s Got Talent: Manoj Muntashir recalls an emotional story about Lata Mangeshkar – “She asked me to write a song for her on Ram” : Bollywood News

FREE GUY rests on a unique plot and is laced with a watertight script, able direction and bravura performances. But an ‘A’ certificate might restrict the business.